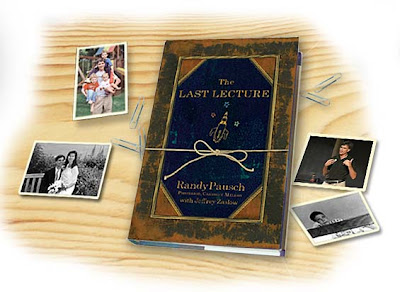 When I got home from Bangalore last week.. there was a parcel from my supervisor. He wrote a note saying that he heard that i was sick & hospitalised and he sent a book for me to read. However, I got it after I was out of hospital... hehe... anyway, it was good for him to post me the book. I really appreciate it. And the book becomes more meaningful to me when he told me that the book was given to him by his mum in the U.S and he gave the book to me as he felt that the book was so precious to him and had given him some sort of courage to go on with his life. So he hope to 'extend' the courage to me so that i would be able to go on with my life...

The title of the book is The Last Lecture by Randy Paush. I took about 3 days to read the book (although the book is only around 200 pages.. hahaha). I always do my readings before going to sleep. The book is about a computer science university lecturer - Randy Paush who is fighting with pancreatic cancer. It was his last lecture and he stepped in front of an audience of 400 people at Carnegie Mellon University to deliver a last lecture called “Really Achieving Your Childhood Dreams.” With slides of his CT scans beaming out to the audience, Randy told his audience about the cancer that is devouring his pancreas and that will claim his life in a matter of months.

The book is about his dreams... and making dreams become realities. Although at the moment I have passed some of the difficult moment in my life.. but the book did inspire me.. to go on with my life.. he had his last lecture.. but me.. I haven't even finished my study, and even my first lecture seems to be million miles away.

We had a great day here at the Pausch household; the kids made matching tie-dye shirts for me and them (note! Tie-dye stays on skin quite a while!). I'll try to get a photo up shortly.

Health-wise, I'm slowly bouncing back from the last round of chemo. Last Thursday's PET scan showed that the cancer continues to grow, but is still more restrained in its rate of growth than it might be, which is good.

I blog for my own pleasure and i write when i am happy, lonely, sad..

~mel
~a wife, a mommy and a professional career woman... but if i've been given a chance i would like to be a housewife to take care of my children and focus on sewing and craft making..